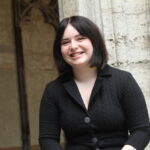 Anne Sieberichs did a BA (Hons) Culture Studies at Tilburg University, while also having a specific interest in Biblical Hebrew. During her Bachelor, she connected Culture Studies with the Middle Ages with a thesis on the medieval cardinal virtues within Tolkien’s The Hobbit. She is now a student Medieval History in the RMA Ancient, Medieval and Renaissance Studies at Utrecht University, where she is particularly interested in Merovingian hagiography, as well as gender in Anglo-Saxon England. Anne also did a master-apprenticeship within the project, where she looked at the explicit and implicit use of the wall (murus, moenia and porta) and its associations. This research attempted to shed light on the usage of this kind of terminology within the Merovingian period and whether this usage has been influenced by the Christian nature of hagiography, but also in what way the wall can be evoked implicitly through Merovingian monastic Rules and hagiography.