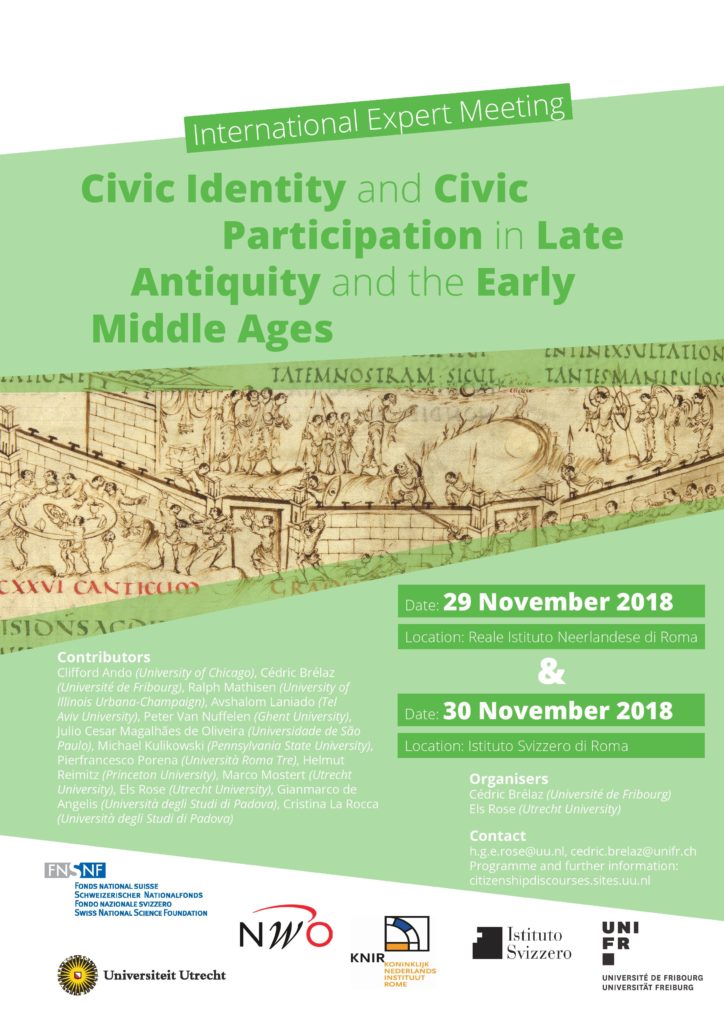 Citizenship and assertion of belonging to civic political communities were among the core principles and values on which societies relied for centuries in Ancient Greece and Rome. The collective volume Civic Identity and Civic Participation in Late Antiquity and the Early Middle Ages aims to analyse the continuity and discontinuity of civic membership in local communities as it developed in late and post-Roman Europe. Both in the patchwork of Germanic kingdoms that replaced the Empire in the West and in the monarchical and “theocratic” Byzantine Empire in the East the notion of civic belonging underwent drastic changes, changes that led scholars to the opinion that issues such as “citizenship” and civic political participation ceased to play a relevant role. The volume and preceding conference aim at both reassessing the implications of those changes in the cities of the Later Roman Empire and at examining how social and political identities, and legal institutions, were transformed in this period.

Contributions will explore the meaning of civic identities and the actual significance of civic participation in the definition of political communities from the third to the eleventh century CE. By civic identities and participation are meant the various forms of expression of collective belonging and of popular will in urban and local contexts in Late Antiquity and the Early Middle Ages. Starting from the Classical background of the concepts of citizenship and democracy, this volume will examine how the idea and the practice of civic participation have been reinterpreted and rephrased over time. The contributions will assess the relevance of similar concepts for the post-Roman period and will examine what kind of power or representation the people were assigned in local communities at that time. The collective volume will provide a reappraisal of the impact of Classical heritage with regard to civic identities in later political experiences and will examine which new forms of social and political partnership were negotiated in the Early Middle Ages and in Byzantium.