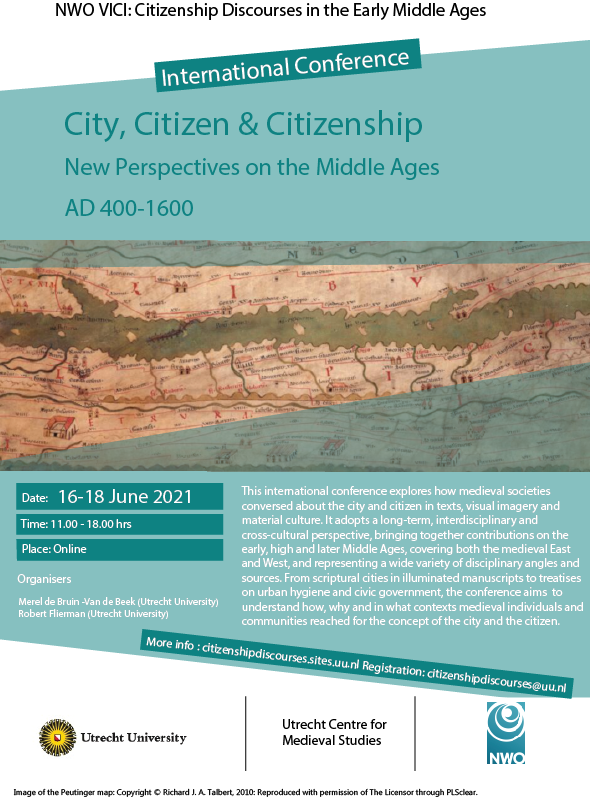 It is with great pleasure that we announce the International Conference “City, Citizen & Citizenship. New Perspectives on the Middle Ages, AD 400-1600”, which will be held on a digital platform on 16-18 June, 2021

Cities and citizenship were an intrinsic part of the medieval world. Even in heavily de-urbanized regions and among those who purposely retreated from urban society, the city and the citizen remained crucial points of reference. Whether conceptualized as a material space, a social community, a historical entity, a heavenly ideal or the embodiment of worldly vice, the city was good to think with. It was a rhetorical resource that was employed for myriad literary, social and political purposes. City and citizen stood at the heart of an ongoing medieval conversation about community, belonging, virtue and vice, inclusion and exclusion.

This international conference explores how medieval societies conversed about the city and citizen in texts, visual imagery and material culture. The conference is organised by the NWO-VICI research project “Citizenship Discourses in the Early Middle Ages, 400-1100”, in close cooperation with the Utrecht Centre for Medieval Studies. In line with their shared ambitions, the conference adopts a long-term, interdisciplinary and cross-cultural perspective, bringing together contributions on the early, high and later Middle Ages, covering both the medieval East and West, and representing a wide variety of disciplinary angles and sources.

The conference is first and foremost about medieval perceptions and their articulation in text, image and material form. The principal focus is not on cities or citizenship per se, but on those who used such concepts, wrote about them, and visualized and depicted them. From scriptural cities in illuminated manuscripts to treatises on urban hygiene and civic government, the conference aims to understand how, why and in what contexts medieval individuals and communities reached for the concept of the city and the citizen. Naturally, this context could be that of the physical city, generating a complex interaction between how the city was imagined and how it was organised, experienced and lived. At the same time, the conference seeks to address why the city remained such a salient concept also in non-urban contexts – the periphery, the desert, the monastery – and how medieval thinking on the ideal city and civic community could involve denunciation of the earthly city and its institutional trappings.

The City, Citizen & Citizenship- conference is generously supported by the NWO-VICI Project “Citizenship Discourses in the Early Middle Ages, 400-1100,” and the Utrecht Centre for Medieval Studies (UCMS) at Utrecht University